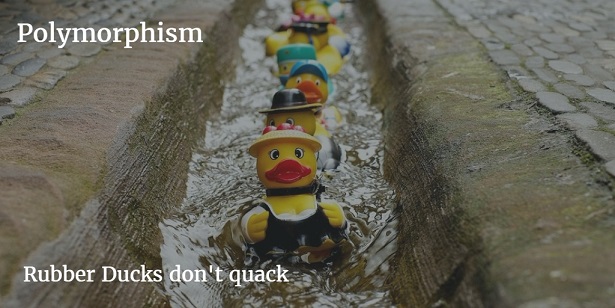 Dictionary: “The condition of occurring in several different forms”

Wikipedia: “from the Greek roots "poly" (many) and "morphe" (form, shape, structure)” and “the ability in computer programming to present the same programming interface for differing underlying forms (data types, classes)”

Run time polymorphism - Overriding - class overrides a method in its parent. The decision as to which one to call is made at run time according to the object used. This is typically what people refer to when they talk about polymorphism. Onwards to an example:

We’ve got a class for a duck:

And a RubberDuck class, which is clearly a type of duck:

We’re then going to use those ducks:
Duck myDuck;

Here you can see that we’re calling the MakeNoise method and we get a different noise according to the object used. That’s runtime polymorphism!

Compile time polymorphism - Overloading - e.g. multiple overloads of a method with different signatures, at compile time you know which method is being called. I hadn’t realised this was referred to as polymorphism, to me it was just overloading – so there you go, every day is a school day! An example:

So this class does stuff, sorry - I’m running low on creativity! You can see it has two different methods called DoStuff, one has a parameter, one doesn’t. Then when we want to call DoStuff, we decide which one to call, so:

We’re choosing which one to call according to what we want. That is compile time polymorphism!

I’m a big fan of visibly displaying information instead of simply attempting to use words. For example, I could explain the AND (&&) operator as equating to True only if the two values associated with the operation are also True. It's a bit wordy

The dictionary defines the word Code as: “a system of words, letters, figures, or symbols used to represent others, especially for the purposes of secrecy.” Hopefully when I write software my code lacks secrecy! Lately I’m becoming far more aware of how code